Wild Oats X’s official finish time for the 384-nautical-mile season-opener was 10:28:27 pm, giving them an elapsed time of 1 day 9 hours 28 minutes 27 seconds, and a trio of line-honours wins. The other victories were recorded in 2005 and 2009, plus this champion team has beaten the Gold Coast Race fleet to the Main Beach finish line six times with the 100-footer, Wild Oats XI.

Dockside at the Cruising Yacht Club of Australia’s finish partner, Southport Yacht Club, Richards said: “It was a great race, you couldn’t have asked for better conditions and against a fantastic fleet – very competitive. It was great to sail the 66 again. It’s a beautiful boat…it’s 15 years old now. It’s given a lot of people a lot of joy.” 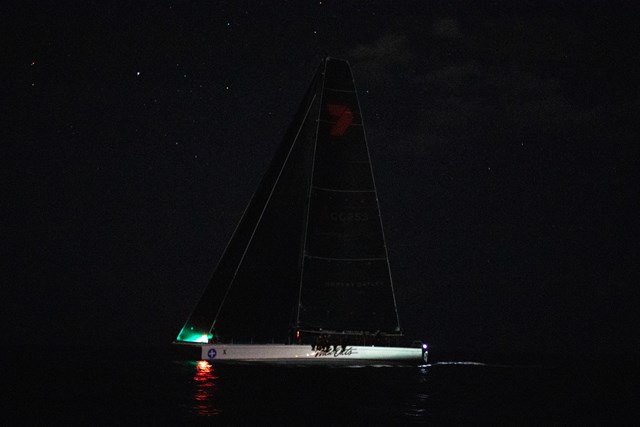 Wild Oats X led the fleet out of Sydney Harbour following the 1pm start on Saturday, and from there navigator Adrienne Cahalan and the brains trust of one of Australia’s most experienced offshore teams, including recent Etchells world champion Iain Murray, worked around the clock to maintain their often-slim advantage in the shifting southerly winds.

“It was tricky for us; we kept headbutting cloudbanks then we’d slow down and the guys would compress back up to us again,” Richards elaborated, adding “that got rid of our chance at a handicap result. There were quite a few close calls with whales – we missed one by around three feet passing Byron Bay. They were everywhere!

“Line honours is a fantastic way to celebrate my birthday. I’ve got 35 minutes before midnight so I’ve got time to enjoy a couple of beers with the crew,” said the grinning skipper.

Second over the line less than an hour later was race sponsor Sean Langman and Naval Group, an RP65, and third David Griffith and Rupert Henry’s Chinese Whisper, a JV62 also from Sydney.

By 0700hrs on Monday, 16 boats in the now 74-boat fleet had completed the course and the focus moved to the prized corrected time win.

Whisper becomes a shout for the GROUPAMA Race
February 12, 2020